I was introduced to Our Solar Siblings at the Teacher PD Workshop – “Astronomy from the Ground Up” – held by CSIRO’s Rob Hollow at Parkes Observatory – The Dish.

Michael Fitzgerald spoke about the program, I was hooked, and wanted to learn more, as I was teaching a Year 9 Astronomy Elective.

I implemented the Program to my new Astronomy Class in the 2nd semester 2017. I had all the material, and was ready to go. The best thing was whenever I had questions, I could rely on support from Michael and/or Ross Cutts (another Solar Siblings expert and teacher) to answer my email/questions whenever I needed to clarify anything or wasn’t sure. Sometimes even creating an extra help video.

The program has everything any teacher needs to implement a course – help videos, powerpoint presentations, teacher notes, student notes and worksheets PLUS what excited me the most – was access to REAL Data from real research telescopes from around the world. 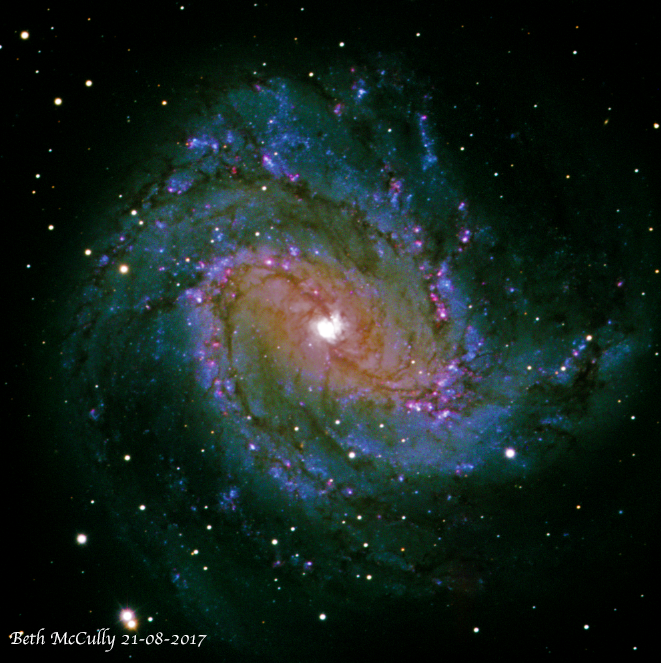 My students enjoyed creating Astro-images – they compared them to ones on the internet, from Nasa images, Astro-image of the day, etc. Then we began to “order our own images” – using the Las Cumbres Observatory. This was very cool. So much so I got emails from students over the weekend!!

Last night I had found some galaxies and nebulas that I would like to order. If I give them to you, would you be able to order them for me?

At parent teacher interviews, one mum said she was so jealous of what her daughter was doing – as she was an amateur photographer herself – and was fascinated by the images her daughter was creating.

We moved onto other area of the program – where we used Type Ia Supernova data to find Hubble’s Constant. This would give us the age of the Universe. I was unsure how this would go, as I didn’t have a full understanding myself in regard to the detailed science behind it. It was a quite a bit of data input and and gathering information from images – Our Solar Siblings had everything set up to go, but I still had doubt in my mind.

It worked like a charm, kids were surprisingly engaged – I had them in groups – each student had to do a minimum of three data inputs for their group. 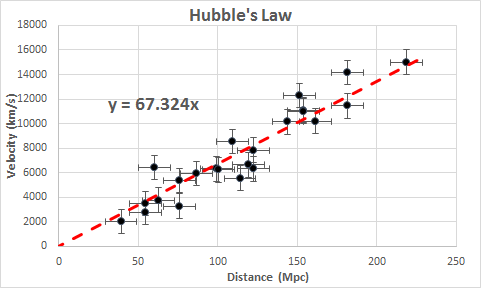 What was really interesting was that when each group got their Hubble constant – it varied from 35 to 70. The groups that estimated between 68 and 70 had done a lot more data points than all the other groups. One with a low of 35 had only done 4 data points. This lead to some great discussions re: lines of best fit, accuracy of data input, how scientists work and the need to deal with lots of data for evidence. How would have Hubble done it back in his day without excel/computers. We got the answer to the age of the universe to be 13.5 billion years old – to have the students then “google” the answer and verify their results also brought smiles to their faces. They had done some “real science”, following in the footsteps of Edwin Hubble. Here’s another random email I received from a student, who was obviously keen to learn more about the Big Bang Theory.

Hey Ms Timms
I found this cool video yesterday about the Big Bang.
https://www.youtube.com/watch?v=wNDGgL73ihY&t=113s
It talks about Quarks and gluons and stuff.
the channel that uploaded it also does lot of really cool videos on space and other stuff.

When we had our next class, Lachlan was asking me, all about Quarks, Gluons etc.. I have some basic knowledge of this, but not a lot of recent knowledge, however to be chatting to a year 9 student about quarks, gluons and subatomic particles was a pretty good feeling.

We still have plenty to learn in regard to Our Solar Siblings program and I see plenty of potential for my students to become researchers/ astrophysicists of the future. I know it has sparked definite interest in some of my students.

One thought on “Our Solar Siblings @ Galen Catholic College”